How to interpret prophecy 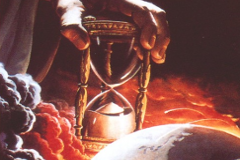 Introduction to the Endtime

In Christianity, the time of the end is depicted as a time of tribulation that precedes the second coming of Christ, who will face the emergence of the Antichrist and usher in the Kingdom of God. In Islam, the Yawm al-Qiyāmah, the Day of Judgement [Day of Resurrection], is preceded by the appearance of the Mahdi [Guided One] atop a white stallion. With the help of Isa [Jesus], Mahdi will then triumph over Masih ad-Dajjal [the false messiah]. - Wikipedia

Prophecy has been an intriguing subject throughout the centuries, from Moses and John the Revelator to Nostradamus and beyond. There have been numerous interpretations of their prophecies ranging from the reasonable and logic conclusions to far fetched and wild theories.

The Bible is full of prophecies, many of which have come to pass with amazing accuracy (read for instance, Who is Jesus about fulfilled Messianic prophecy). It would seem reasonable to assume that the yet to come predictions will also be fulfilled?

It is true that a passage from Matthew 24:36 reads, "But of that day and hour knoweth no man, no, not the angels of heaven, but my Father only." It is likewise true that Jesus encouraged us to "discern" the signs of the times in Matthew 24, Mark 13, Luke 21, and John 14. We have also been given 1Thes.4 & 5, 2Thes.2, 1Tim.4, 2Tim.3, 2Pet.1 and 3, & the whole Book of Revelation, as well as multitudes of prophecies in the Old Testament, including many in the Historical Books, as well as the Poetical Books, & 17 Books of the Prophets. So it seems that if God didn't want His children to know anything specific about the future, then "He wasted half the Bible talking about it, & we ought to throw that half away!"

There are several schools of thought when it comes to interpreting prophecy. Some try to put a spiritual or allegorical meaning into every prophetic passage. Others take it more literally.

Many times the meaning is simply explained as you go along, like in Daniel 8 when it says, "And the rough goat is the king of Grecia" (Dan.8:21) - it's explained there plainly.

In some places the meaning is not so obvious and certain things are clearly not to be taken literal. Then we have to look at other verses or use deduction and compare scripture with scripture to find out what it means.

A reasonable rule of thumb as the first choice is to interpret it as literally as possible. If it makes sense literally, we should probably take it literally. If it doesn't sound reasonable or logical or it just looks like it's virtually impossible to interpret it the literal way, we should study its context thoroughly for an explanation or look at the rest of the chapter to see if it's explained.

There is a danger in becoming too dogmatic and too set on one particular interpretation. It is simply not wise or reasonable to try to put a label on everything and think we can figure out every little minute detail of what is going to happen. Leave ourselves open. Some went too far in predicting specific dates and times for Jesus' return or for certain events and they were disappointed. Remember we are all just fallible humans who "see through a glass darkly". (1 Cor.13:12)

The videos, articles and posts included in these pages are intended to give a sampling of possible interpretations by different authors. The opinions are solely those of the authors and are open for debate and discussion, but they certainly represent food for thought on what is to come.

An interesting viewpoint hold that the Bible is a continuous revelation of more and more truth. Some prophecies are like patterns of truth that keep repeating themselves and some prophecies have intermediate fulfillment while some also have ultimate fulfillment.

A large percentage of predictions in the Bible have been fulfilled in amazing detail. This fact of history gives us strong reason to believe that the predictions regarding the time of the End will also be fulfilled. Many of these as-yet unfulfilled prophecies are of course subject to interpretation.

The encouraging things about Endtime Bible prophecy is that even though difficult times are predicted about the future of this World there is a happy ending with the eventual establishment of a benevolent King who will bring in "Everlasting righteousness" and a Heaven on Earth with peace and plenty for all.

So even if we don't understand everything and can't name every beast, or pin a label on every horn, we can have Jesus and a guarantee of an eternity with heavenly happiness - Praise God!

The conclusions given in these articles concur by an large with the majority of those Christian denominations that deal with Eschatology.

When you get to the "last seven years" and especially how to interpret the last part of Daniel chapter nine, this is where interpretations start do differ.

The video series below cover the key points in understand the prophecies of the end-time.

A video and lecture Series

If you feel this explanation of the last seven years make sense you are welcome to it :-)