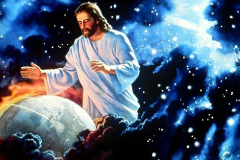 
There has been a lot of talk recently about Graham's message of Jesus' Second Coming. Speculations abound on the timing, and that has been going on for a long long time.

Billy Graham's message of Jesus' Second Coming has been in the news. See Billy Graham sounds alarm for 2nd Coming

From political leaders to film makers and celebrities, a lot of people seem to capitalize on this announcement. Well, here's my 5 cents worth...

I agree that the "Signs of the Times" are mounting, which is exciting especially for pre-tribulation rapturists, like the misguided "Left Behind" idea, but thats another discussion dealt with in the post entitled, We Didn't Miss the Rapture.

"Now, brethren, concerning the coming of our Lord Jesus Christ and our gathering together to Him, we ask you, not to be soon shaken in mind or troubled, either by spirit or by word or by letter, as if from us, as though the day of Christ had come.

"Let no one deceive you by any means; for that Day will not come unless the falling away comes first, and the man of sin is revealed, the son of perdition, who opposes and exalts himself above all that is called God or that is worshipped, so that he sits as God in the temple of God, showing himself that he is God."

In other words, the false messiah will come before the true Messiah

"And now you know what is restraining, that he may be revealed in his own time. For the mystery of lawlessness is already at work; only He who now restrains will do so until He is taken out of the way.

"And then the lawless one will be revealed, (the antichrist - ed) whom the Lord will consume with the breath of His mouth and destroy with the brightness of His coming.

"The coming of the lawless one is according to the working of Satan, with all power, signs, and lying wonders... (New King James version)

The signs of the End does look prominent, but as Jesus Himself explained,

"Take heed that no man deceive you... the end is not yet... When you see the abomination of desolation, spoken of by Daniel the prophet, stand in the holy place... then shall be great tribulation... Then if any man shall say unto you, Lo, here is Christ, or there; believe it not... Immediately after the tribulation of those days... shall appear the sign of the Son of man... and they shall see the Son of man coming... with power and great glory." (Matthew chapter 24)