Since we’d had to say goodbye to our faithful van from Sweden it was time to get another vehicle. The Nissan had brought us to the place we were supposed to set up in East Ukraine, and it was becoming increasingly clear we needed an upgrade. So Martin, my oldest son, and I set out for Scandinavia to see what could be done.

At that time it was a five-day drive to Scandinavia from Dnipro. Day one to Kiev, day two to Warsaw (longest stretch), day three to Berlin, day four to the border of Denmark. and then on the fifth day across Denmark to Copenhagen.

It looked like the first order of priority was raising funds for another car.

Scandinavians do not typically have a tradition of supporting missionaries. I think it has something to do with having a State Church that is financed through taxation, and also having a relatively good social security systems. Everyone is fairly well provided for, so understandably most people don’t see the need. The high level of taxation already covers health care, social services and so on.

We also had friends up in Birkerød, the Toyota mechanic, the bike shop owner, and a dear distinguished elderly gentleman, who used to send us a gift every month while in Thailand.

In those days there was no fundraising via social media or “go fund me” campaigning, so instead we drove around and visited all our friends one by one, talked to them and presented the need. Each of them kindly and generously gave to the cause. We were able to collect enough for a second hand Mercedes van, which a mechanic in Hundested was in the process of fixing up.

While the mechanic took his sweet time getting our new vehicle ready, we took another tour all around Denmark collecting supplies and humanitarian aid for the field. We could use just about anything and everything, from computers to cleaning supplies, from clothes and food to medical supplies, oil and filters and tools, and what have you. 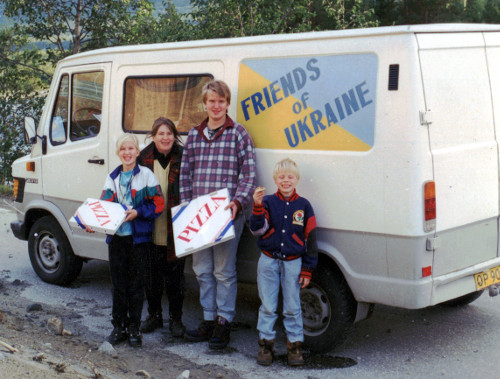 Eventually the Mercedes 207 box van was ready, so we set off back east-ward towards our base in Ukraine. By this time it was late fall when we were on our way through Poland.

We stayed overnight with friends in Warsaw and the temperature suddenly dropped to minus -17°C. It got so cold that next morning there wasn’t enough power in the battery to get the engine started.

After failing to start four different vehicles we had the bright idea to connect two batteries together and thereby get enough juice to get one of them going. Then we were able to pull-start the rest of them with a rope.

It was afternoon before Martin and I could continue on the next and longest leg of our journey towards Kiev. The temperature continued to plummet, and since the gas stations had been taken by surprise by the sudden cold spell, they had not been able to switch to winter diesel. Later on I learned the trick that Ukrainians use in such events, they would add 20-30% gasoline to the diesel to keep it from turning to wax in the cold.

The result being, that on the long stretch between Warsaw and Kiev our fuel filters would clog with wax and the engine would cut out about every ten kilometers or so. Thankfully I had obtained new filters from Denmark, so I would quickly yank off the engine cover, exchange the clogged up filter with a fresh one, and then place the clogged up filter in the hot air vent in order to melt the wax.

It took me some time to figure out this routine. We had two vents and three filters, so it became a rotating business. Each time the engine died I started to seriously worry if we would be able to get the motor going again.

I am not easily scared, I consider myself pretty brave, but this time I admit I was worried! I could just imagine us freezing to death there on the cold steppes below Belarussia, but I kept on a brave face for my son’s sake – I didn’t want him to worry.

It was way past midnight when we finally made it to our friends apartment complex in Kiev. We were dead tired but thankful that we had managed to make it.

That was not to be the end of our troubles…

The next morning I woke up ready for the last leg of our journey. We had been gone for almost two months, but I was thankful we were bringing much needed supplies and a bigger van back with us.

When I came down to the van, which we had parked under a street light, I discovered that during the night it had been broken into. Everything of value had been stolen and only a few cleaning supplies and bits and pieces of furniture were left!

They had managed to take the window out of the side door to gain access to the interior, I found it under the car. My heart sunk, I was devastated! We had worked so hard to collect these supplies for our fledgling work in Dnipro, and now it was gone! How could this happen? - Lord why? I am Your faithful servant! How could You let this happen to me? I have to confess that was my first and “slightly” self-righteous reaction :-(

Exhausted as I was, I went up to the apartment and prayed, I had to get hold of the Lord, or I would have lost my mind. After getting my spirit somewhat calmed down in prayer I heard something to the effect of, “I want you to experience what it feels like when the poor oppress the poor. Now you are better able to relate to the people of this country! What you need to do is count your losses, put your house in order, and keep going!” Basically God gave me a good and needed push in the right direction. I took it to mean that I should stop wallowing in my self-pity and carry on.

In hindsight, that was precisely what I needed to hear! We were able to get the side door window back in place, and later that day we continued on the last leg of our journey from Kiev to Dnipro. As it turned out, we were one of the last cars to make it into Dnipro that night, before the snow closed off all roads to the city for the following several days.